After 12 years we finally received the permits to conclude the construction of the Centre and the first step is to finalize the Temple of Heaven on Earth, our holy place. This will include a Buddhist library, the Wisdom Planetarium, the Peace Culture museum, the Peace Protector gompa, the meditation hall of Tara, the House of Kechara meditation hall, a yoga area, a meeting room and accommodation for Lamas.

Together with the help of everyone, we can make it happen and complete the construction.

We ask the support of everyone to make this dream come true.

How it all started

When Lama Gangchen Rinpoche came from Tibet to India, he made a commitment to help others by sharing the Dharma in accordance with his own lineage and tradition. His intention was – and still is – to promote world peace through the development of inner peace.

Throughout the years that followed – particularly in the 70s – he had visions that, in order to share the Dharma, he should settle down in a place surrounded by five mountains in the back and a lake in the front. At that time there was no plan to go to the West so he looked for such place in India and Nepal. At the beginning of the 80s, Rinpoche finally arrived in Europe and started adapting the teachings and the practice to our modern society. His intention was to share with us the tools to heal oneself and others as a path to enlightenment. He found in this modern society a fertile ground for planting and watering the seeds of enlightenment and keeping his own lineage alive for the benefit of all.

And so, since then he has dedicated his life to us. He constantly sought out that place with a lake in the front and mountains behind to establish his activities.

In 1999, after starting to rebuild his monastery in Tibet, in the very same month of January, one of his disciples and friend Patrizia found a place with five mountains and a lake in Italy, near Switzerland – exactly as Rinpoche had requested her. This place was called Albagnano. Patrizia called Rinpoche in Tibet to share the news. The land in Albagnano was seen as a twin of the Gangchen monastery and was therefore called Gangchen Choepel Ling. Once Rinpoche fulfilled his responsibility from his previous life towards his monastery in Tibet by rebuilding it, the doors to accomplish the mission of this life in the modern world opened up. 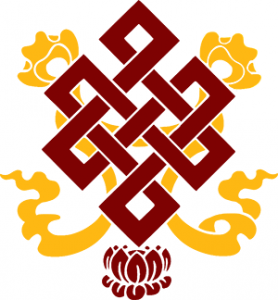 At the time, with the help of kind friends, he settled in Albagnano, where he has since been living. Here are also located the operational Headquarters of the Lama Gangchen World Peace Foundation, a United Nations-affiliated NGO with ECOSOC consultative status. Rinpoche has been investing his energy to transform this place in nature not only into a pure environment, but also in a holy place for pilgrimage, healing, spiritual practice and study. A center for learning, comprehending and meditating, where the Dharma can be taught, the practice can be done and by that, the lineage kept alive.

A lineage is kept alive when there are people that, by following the teachings through an uninterrupted transmission, put them into practice and gain the realizations. In order for that to happen, we must share the teachings, comprehend them and meditate.

Rinpoche has been giving us the greatest of all gifts: the pathway to liberate ourselves from the sufferings of samsara and to help others by reaching the ultimate state of Buddhahood. In other words, he has taught us that developing inner peace is the only way to reach world peace. As Rinpoche himself says ‘inner peace is the most solid foundation for world peace’.

To achieve this, we need centers for study, comprehension, meditation and healing where we can have all the necessary conditions to cultivate our qualities and reach a deeper state of inner peace. Albagnano Healing Meditation Centre was founded with this intention and a master plan was created for the healing of body and mind in a pure environment.

In order to fulfill these aims, Rinpoche envisioned a temple with meditation halls, a Buddhist library, a peace culture museum and a Wisdom Planetarium. In addition, he planned rooms for important visiting lamas and teachers,  a multipurpose conference hall and the necessary facilities to accommodate and welcome practitioners and guests from all over the world.

The Centre is meant to be a hub for anyone interested in a spiritual path, regardless of cultural and religious background.

Albagnano Healing Meditation Centre – Gangchen Choepel Ling – is located in a pure environment neighbouring the natural reserve of the Sacred Mountain of Ghiffa and is minutes away from Italy’s biggest unspoilt park, the Val Grande National Park.

In order to achieve the goals of the Centre, in 2004 a formal request was submitted to the local Municipality of Bèe to modify  the municipal master plan and allow for the construction of the Temple and all the necessary facilities.

After 12 years of bureaucracy: architectural planning, proposals, meetings, negotiations and an environmental impact assessment, the master plan of Bèe was modified and integrated with a customised project (S.U.E. Lama Gangchen), recognising the area of the centre as being of social, cultural and religious purpose.

In December 2017, an agreement was eventually signed between the Fondazione Lama Gangchen per una Cultura di Pace (Lama Gangchen Peace Culture Foundation) and the Municipality, granting permission to renovate and rebuild the existing structures.

The complete project includes 2300 sq metres of new construction, which is divided between the Temple, new rooms for guests, and a multipurpose conference hall.

In addition, as with the completion of the project the local government foresees a considerable increase in visitors, they requested  the construction of a secure and accessible road connecting the village of Albagnano to the Centre.

To create the correct causes for the Swift Return of our precious Guru,  my wish is to complete the whole project for December 2021.

I continue with my commitment to taking care of the realisation of Rinpoche’s dream, together with a team of architects, engineers and construction experts, but it will only be possible with the help of all the Sangha.

With that objective in mind, we are continuing with a new fundraising campaign to complete the project.

The Temple of Heaven on Earth

The temple supports us on our path to enlightenment by providing the conditions to listen, comprehend and meditate.

The ground floor houses the main meditation and prayer hall that is open to everyone who wants to participate in pujas and ceremonies or just use the space for their own spiritual practice or to be in a peaceful environment.  This floor has  been  extended to include  a new entrance area with reception, toilets and a room for simultaneous translation.

On the first floor will be:

On the mezzanine floor will be:

Thank you very much for the support you have already given. We have successfully completed the first phase of the Temple campaign.

For those who are still finishing their installments for the 2000 Buddha’s campaign please continue until the end of your installments. There will be a 2000 Buddhas altar with the name and dedications of all the supporters.

To continue to support the Temple campaign, please refer to the Completion Stage at: 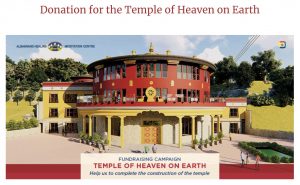